When you tell people that you lose weight by drinking Diet Canna Caps, they look at you strange. After all, weed is known for giving people the type of appetite that allows them to finish off an entire bag of Cheetos, or eat ten burgers from the drive thru. Recent studies have shown that people who use cannabis regularly have a waist size 1.5 inches smaller than people who do not. Kinda blows that stereotype out of the water, doesn’t it?

It sounds almost too good to be true. Shockingly, it isn't. Misconceptions about cannabis still abound.

Not All Strains Lead to Munchies

Contrary to popular belief not all strains of cannabis will give you the munchies. Strains that are high in tetrahydrocannabivarin or THCV and CBD can actually suppress appetite and can be used to fight obesity. THCV has the same psychoactive effects as THC, but it doesn’t last as long. It does give the user a high that has more in common with stimulants. THCV is also believed to regulate glucose levels and reduce insulin resistance, thus helping prevent diabetes.

Here's a big problem that we all face: Losing weight is hard to do if we're stressed. And who isn't these days? Truth be told, our fast-paced modern-day lives subject us to too much stress. Unfortunately, we're just not hard-wired to deal with constant pressure. This is why it can negatively impact our health in a multitude of different ways. At the very least, stress can promote weight gain. It can also interfere with your efforts to lose unwanted pounds, particularly around your waistline. That's why exercise isn't always very effective.

How does this happen? Blame it on the stress hormone, cortisol. Our bodies' production of cortisol is part of our evolutionary reaction to perceived danger, which is commonly known as the "fight or flight response". When this kicks-in, your body is flooded with cortisol to raise your blood pressure. In turn, this enhances the flow of oxygenate your muscles and brain -- hyper-energizing you to react to any real or imagined threat. The problem is that every-day stressors tend to trigger this physiological reaction all too often. And when stress is unrelenting, your body is likely to respond -- even without you realizing it -- by going into survival mode. This causes your body to hoard fat and burn fewer calories than normal.

Why is this? It's merely a biological defense mechanism against famine -- a seriously stress-inducing threat to humankind that was commonplace until a few decades ago. So, unless for instance you're starving to death or being chased by a grizzly bear, cortisol isn't your friend. Remember, it's a fat-hoarding hormone. So, you need to keep it in-check.

You can minimize your body's production of cortisol by simply by learning to relax. And if you need a little help doing this, medical marijuana could become your new best friend. Especially if it can shrink your waistline in the process. However, there's a catch: For many people, cannabis can actually induce stress, temporary paranoia and/or even panic attacks. This is due to the presence of cannabis' most renowned chemical - THC. This is what causes the chilled-out, mildly euphoric feeling that most people experience with marijuana. In other words, it's the psychoactive agent in pot that makes you feel "stoned". Unfortunately, the recreational cannabis culture has traditionally promoted the notion that the stronger cannabis is, the better it is. That translates into lots of THC.

But that's not what everyone wants. Instead, plenty of people would rather enjoy the relaxing benefits of cannabis without any cognitive impairment. What's particularly remarkable about CBD (aka cannabidiol) is that it significantly reduces the stress-increasing effect of the THC in cannabis. That's really important if you want to trim down because THC can actually raise your cortisol levels, even if it doesn't induce any anxiety. In fact, CBD has the exact opposite effect to THC in that it lowers your cortisol levels, thereby making it easier for you to lose weight and to keep it off.  This will make your metabolism more efficient by allowing you to burn more flab, particularly around your middle.

As proof of CBD's fat-fighting powers, it has even been shown to reduce obesity in animal studies. Also, laboratory rodents that were administered CBD while on a calorie-restricted diet lost more weight than their counterparts in a control group.

You'll discover how to chill your way to a leaner, fitter, and ultimately happier version of yourself. 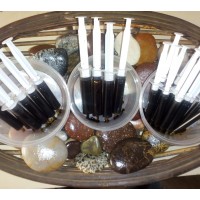